The Paxos algorithm, when presented in plain English, is very simple. -- Leslie Lamport 2001 [1]

I am going to try explain the single decree Paxos in a way, hopefully, that's easy to understand.

Paxos as a protocol, is trying to solve the consensus problem. Put in plain English, it's trying to solve a problem that a system will only choose one value when one or more servers can propose different value(s).

The real world example would be something like an election. People can vote for different president. But only one president can be chosen.

Paxos is designed to deal with fail-stop/crash (non-Byzantine) and message delay/loss. Also there's a liveness requirement that some proposed value is eventually chosen as long as majority of the servers are running. This is to avoid uninteresting solutions like never-accept-any-value. If you do nothing, you will do nothing wrong. Similarly, you don't want more than one presidents be elected and you want to have a president eventually as long as people are voting.

On a side note, to be honest, I think trying to use voting as an example to explain Paxos, in the original Part-Time Parliament[2] paper is very natural. But somehow it didn't work very well. Lamport also said it himself in an interview that it's a total failure, which is unfortunate. 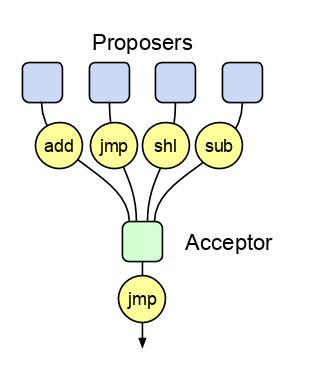 With a cluster of 2F+1 servers, what happens if we always make one certain box to accept proposals. And whatever proposal being accepted by that box is chosen.

The problem of this approach is that a single down box can make the service unavailable. But the requirement says the service needs to be up and running as long as majority of the servers are running (F+1 in this case).

Notice that this is effectively a single master replication model. And this is exactly why downtime is inevitable with master-slave replication.

So if having a single acceptor doesn't work, maybe we should wait until multiple servers have accepted a proposal before we claim a value being chosen.

So the number of acceptors has to be >=F+1. Since fewer the acceptors the better, let's just go with F+1. And it can be any F+1 servers in the cluster.

We have already made some progress! If any proposal's accepted by F+1 servers, it's chosen.

Now let's see how acceptors should decide if to accept a proposal or not.

It wouldn't work, because we can end up never have any value chosen like the case above. This violates liveness requirement.

This would violate the safety requirement as we can end up have more than one value chosen.

Here comes the trick, which I think is THE MOST interesting part of Paxos.

Once a value has been chosen, future proposals must propose the same value.

This means a two-phase protocol would be needed. In the first phase, proposers need to figure out if any value has already been chosen. And propose in the second phase.

If you are a distributed system veteran you must have already noticed one key word in the previous statement. And it's "future". I reviewed Time and Order before. Distributed system is all about ordering. "future" here implies ordering (happen-before relationship). So we have to order all proposals. Then in the example below, we can reject red because we know blue is chosen and red is an old proposal.

An easy way to order proposals is to have an unique ballot number for each proposal in the form of <seq_id, server_id>. In order to guarantee ordering, seq_id has to be persisted cross crash/restart. So it has to be durably stored locally.

Now we are all set up to describe the real two-phase Paxos protocol. We will call the first phase the prepare phase and second phase the accept phase. prepare phase serves two purposes in one round trip. 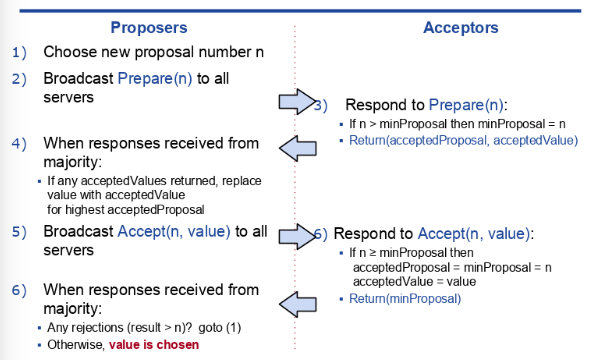 Acceptor has to durably store a few things

Let's take a close look at each step.

In this phase, proposer tries to get a promise from acceptor to not accept any proposals older than his. At the same time, acceptors will inform the proposers what values have already been accepted so far.

In step 3 and 4, a proposer will change its proposal to the latest accepted proposal from acceptors it talked to. It seems to be very conservative because you might get an accepted proposal that's not chosen and the proposer ends up giving up his proposal. But that's OK since we only care about consensus. In the first phase, it's hard for the proposer to know if a value is chosen or not. An accepted value might not be chosen. But a chosen value must be accepted by a majority of the servers! And acceptors reject older proposals (step 6). With two invariants, we know that the latest accepted proposal returned to the proposal in phase one either has already been chosen, or no value has been chosen at the moment. Either way, it's safe to propose that value.

Why keep track of minProposal?
There can be two racing proposals in prepare phase while nothing has been accepted yet. This means they will both move to accept phase. Thanks to the total ordering we have for all proposals and the F+1 requirement, at least one acceptor will see the newer proposal and reject the accept message from the losing/older proposal. The invariant here is that minProposal >= acceptedProposal.

This is probably the most interesting case, as the second proposer didn't see the previous accepted value and a value was not chosen at the time in prepare phase. In this case, it will go ahead and send accept(Y) to other servers. Because S3 has promised that it will only accept proposals later than 4.5, it rejects X. If we don't keep track of minProposal, X will be accepted by S3. Then both X and Y would have been accepted by three servers and considered chosen, which violates the safety requirement.

There you have it. This is the single decree Paxos. That's being said, implementing Paxos has been proven to be very very hard[3].

-- Scalable Read Atomic Transaction for Partitioned Datastore A Story You are…

If you are operating some stateful services, chances are you have to…